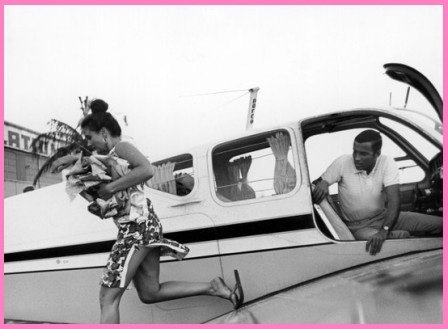 It all started with a juice stand in Palm Beach. Lilly, a young, sassy New York socialite had eloped with Peter Pulitzer, grandson of the Pulitzer Prize’s Joseph Pulitzer and settled in Palm Beach to live the life of the rich and famous. Peter owned several Florida citrus groves, but Lilly needed a project of her own. So in the late 1950’s, with Peter’s produce, she opened a juice stand on Via Mizner, just off Worth Avenue inPalm Beach.

Lilly Pulitzer’s business was a hit, but squeezing oranges, lemons, limes, and pink grapefruit made a mess of her clothes. Realizing that she needed a juice stand uniform, Lilly asked her dressmaker to design a dress that would camouflage the stains. The result? A comfortable sleeveless shift made of bright, colorful printed cotton – pink, green, yellow and orange. The dress even had custom dressmaker details like lining and lace seam bindings. It was perfect for the job and became Lilly’s first Classic Shift.

Although her customers liked Lilly’s juice, they loved her dress. When people began to ask if they could buy the dress, Lilly had a few more made up to sell in the stand. Soon Lilly was selling more dresses than juice, so she decided to stop squeezing and to focus on designing and selling her “Lillys.” Before long, Jackie Kennedy, an old school chum, began wearing Lillys and, as First Lady, was featured in Life Magazine wearing a Classic Shift. Then, of course, everyone wanted one and Lilly Pulitzer® became a fashion sensation.

Through the sixties and seventies, the Lilly Pulitzer line was the unofficial uniform of the affluent at play. Lilly Pulitzer stores sprang up in the favorite resorts of the jet set and Lilly’s pink and green colors became the banner of the preppy lifestyle. In 1984, however, Lilly closed her doors to settle into retirement with her second husband, Enrique Rousseau (her marriage to Peter had ended in 1969) and to enjoy her grandchildren. For the rest of the decade, Lilly devotees were left to scour flea markets and re-sale shops to find their beloved vintage Lillys.